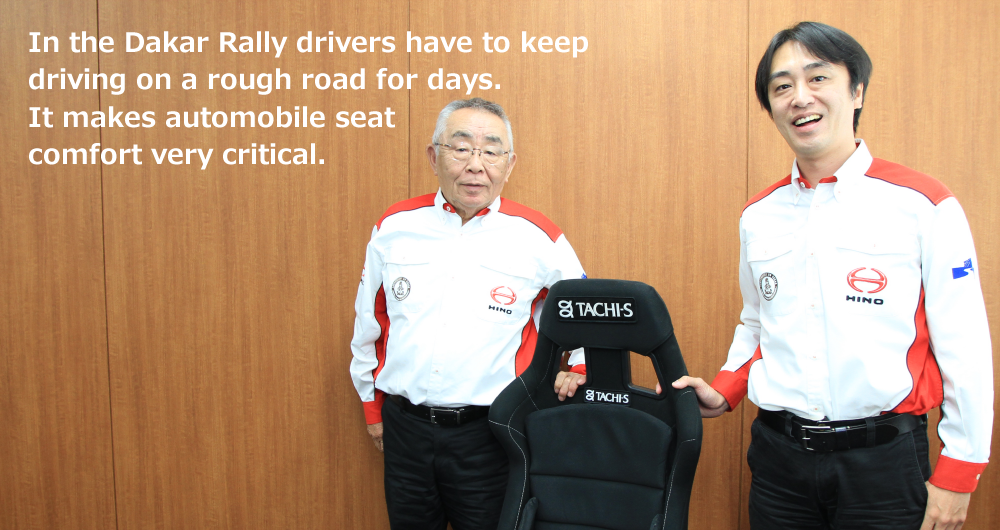 Could you let us know how you started using the seat tuned by TACHI-S for Dakar Rally?

Yoshimasa:  Originally we were using a shell-type seat with a hard surface, which transmitted the vehicle vibration directly to our bodies. It was pretty painful to drive on rough roads. So we asked TACHI-S if it was possible to add a comfortable hammock style seat on top of the shell type. That was how we started to ask TACHI-S to tune-up the seat for us, and eventually to create a seat for Dakar Rally through trial and error.

Basically all the equipment mounted on a vehicle for rally has to be approved by FIA (Fédération Internationale de l'Automobile), and the seat has to be a shell-type. The rule was defined under the assumption of WRC (World Rally Championship) with rather short race times or F1(Formula 1) racing on a clean and flat paved road, not the Dakar Rally with a long ride day after day on a deserted landscape. I've been feeling pretty strange about it.

What kind of seats do other teams use for the Dakar Rally?

Teruhito: Some of them add cushions or some other ideas, but the rest seem to use the approved shell-type seat as is.  It's the same for both Japanese and Overseas teams.

Yoshimasa: Many Dakar racers are making their own cushions and adding them to the FIA approved shell-type seat to pass the inspection. In racing, what's the most important for the automobile is the part that contacts the ground = tires. In the same way the seat is very important as the driver contacts the seat surface for the longest time. The choice of seats makes a big difference in your fatigue or driving stability, which makes it all the more important. I've been asking TACHI-S many specific requests as I am very particular about it, and they've been responding to them generously, including the ones that seemed almost impossible.

How do you submit the request for seat improvement?

Teruhito: The Dakar Rally is held annually around the New Year. After participating in the rally for 2 weeks, we give our feedback to TACHI-S such as "this was good", and "that was not working right". Then TACHI-S takes them in to make an improvement to the seat which allows us to prepare for the next race. Most of our requests are about details of body contacting areas. For the last rally, we were able to prepare by participating in a race in Mongolia in the summer (Rally Mongolia). The race was a good chance to check and give feedback about the seat, and also it worked as a trial run for the Dakar Rally. There is basically no place for us to practice in Japan.

Yoshimasa: We changed our tires several years ago to a type that can withstand a horizontal force that led to a better grip on a corner. We've been asking to make changes to the seat to be in tune with it, such as setting the center of gravity lower. Our request towards the seat has been changing as we race more. I think it is generated from our obsession with the race.

For me, automobile racing is my eternal theme that I really want to master, but something I can never achieve. Even so, I want to keep trying till I feel I meet the goal.

Born May 31, 1941 (Otaru, Hokkaido)
After numerous races in Japan and expeditions including a trans-Sahara Desert run, Yoshimasa started in the Paris-Dakar Rally for the first time in 1983 (age 41) in the Motorcycle category. He has had six second-place finishes in the Trucks category, and won seven championships in the Under 10-litre Class. He holds the Dakar Rally record for 35 consecutive starts. His records for Most Consecutive Finishes in the Dakar Rally at 20 Finishes and Most Consecutive Entries in the Dakar Rally at 34 Entries were recognized in Guinness World Records 2017.
Born July 13, 1972 (Minato-ku, Tokyo)
Teruhito Sugawara, Yoshimasa Sugawara’s second son, first joined the Dakar Rally team in 1998 as a mechanic, and subsequently navigated for his father. During the time, he also gained racing experience in off-road races in Japan, as well as in Rally Mongolia. In 2003, he raced a HINO500 Series truck in the Trucks category and won the Pharaoh Rally in Egypt. He began racing alongside his father in a two-truck lineup in the Dakar Rally in 2005, and won his first championship in the Under 10-litre Class in 2007. His 2018 win was his ninth straight championship in the Class.